Can I Love Harry Potter But Not J.K. Rowling?

Harry Potter has been a constant force in my life. Sorcerer’s Stone was published when I was 2 years old, the movie came out when I was 6 years old, and I read the first five books when I was 8 years old. I have a Harry Potter tattoo and have earned the nickname “Harriet Potter” from my family because of a scar on my forehead that’s roughly lightning bolt shaped. Suffice it to say, I don’t remember there ever being a time I wasn’t in love with the magical world of Harry Potter. But no great love is without its difficulties.

In the past year, J.K. Rowling has published her views on the Trans community, particularly transgender women, which have left the Harry Potter community reeling. She has written tweets and essays saying that trans women aren’t “real” women, and if we say they are then the experiences women face (i.e. violence, sexism, etc.) are erased. Her TERF (trans-exclusionary radical feminist) views have left Potterheads wondering if they can still don their robes and wave their wands with pride. 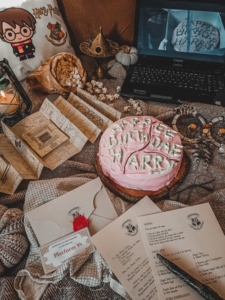 I don’t understand how someone who is capable of creating such an intricate, fantastical world can have such a limited and narrow-minded view of ours.

Many have expressed their disappointment and vowed to never read another Harry Potter book again. Others have said they will continue to immerse themselves in the world of Hogwarts, but will separate the art from the artist. In my opinion, it is impossible to separate the two. J.K. Rowling’s personality, experiences, and views are woven inextricably into the characters, settings, and outcomes of her novels. That being said, I don’t think our only options are to support Rowling and read her books or to disavow her and quit Harry Potter cold turkey.

I think we can continue to enjoy the world of witches and wizards as long as we acknowledge, not ignore, the flaws with the author and the story itself (see: anti-Semitism, racial stereotypes, toxic relationships, slavery). I believe that Harry Potter is bigger than just J.K. Rowling. It was a phenomenon that took over and transformed the world and I believe it no longer belongs solely to her. It belongs to us, the fans.

Harry Potter shaped the person I have become, and in the words of Kay from Hammock of Books, “I don’t want to let a transphobic Karen take that away from me.”

If you still want to enjoy the world of Harry Potter without financially supporting J.K. Rowling:

View All Posts
Santa is Odin

Bullet Journaling for the Win!
Scroll to top