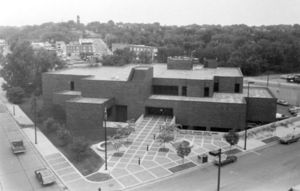 The first 70 years of the twentieth century brought many changes to the library, to Eau Claire and to its citizens.

Space in the Carnegie building was dwindling, the building was becoming a fire hazard, with wooden floors and partitions and old wiring and accessibility was difficult and at times impossible for elderly and handicapped customers. In August, 1973, John Morris, president of the Library Board, presented to the City Council a request to authorize hiring an architect to draw plans for a new library.

On February 13, 1974, the City Council approved funding for the Library Board of Trustees to hire an architect for a new library building. Funding for the new building would come from the following sources: $302,000 from L.E. Phillips Charities; 2.4 million from a city bond issue; and $258,000 from a federal grant through the Library Service and Construction Act.

Construction contracts were awarded in July, 1974. Hoeppner-Bartlett was the general contractor; heating, ventilating and air conditioning was awarded to F.E. Grosvold and the electrical work would be done by C.R. Stocks Electric, all of Eau Claire. Owen Ayres and Associates were the architects for the building system, with the overall building design by Hackner-Schroeder-Roslansky of LaCrosse.

The Carnegie library building was closed on October 28, 1976 and the new building opened on November 15, 1976. Staff and volunteers worked tirelessly during the intervening days to move the collections one block down South Farwell Street to the new library. Ramps with rollers and collapsible wooden boxes were borrowed from Walter’s Brewery to help with the moving. The new Eau Claire Public Library held its formal grand opening ceremony on December 12.

In an article from a special report in Library Journal, John Proctor, library director at the time, describes the new library as “a delightful structure of shapes, shadows and plans.”

In the fall of 2006, L.E. Phillips Memorial Public Library began a capital campaign to raise $3.9 million for an expansion and remodeling project to enlarge Youth Services, make necessary improvements to Adult Services and introduce technological upgrades.

The overall “footprint” of the library was to remain essentially the same, but the interior would be renovated, upgraded and reorganized.

The Eau Claire community responded to this campaign with enthusiastic support and generous donations totaling more than $1 million, and other monies set aside by the library from its previous budgets were approved for this use by the City Council. However, a shortfall of approximately $2.3 million remained.

In the summer of 2008, the library board decided to move forward with this project, and the services of Uihlein-Wilson Architects were engaged to assist with the process of gathering input from the community and library staff and envisioning a modified renovation plan. By late fall, the architects and library staff had settled on a $1.567 million revised plan that addressed the priorities of the original remodeling project. The new project would revamp the library’s Youth Services area, improve the efficiency of the behind-the-scenes area responsible for getting all of the reserved items to customers quickly, provide better access to mircoforms, and create a new checkout area that includes space for customers to pick up their own reserved items.

A construction contract was awarded to RJS Construction Group in April of 2009, and renovation was underway by early May. Youth Services was moved to a temporary location on the lower level; magazines, newspapers, DVDs, CDs, and videos were moved to the second floor; and the checkout desk was replaced with a new desk build in a different location. Several behind-the-scenes areas on the library’s first floor and lower level were relocated and remodeled to improve efficiency of moving materials and a new microforms and research room was established near Information and Reference. The entire Youth Services area was dismantled, expanded, and refurbished.

In November of 2009, the library hosted grand re-opening events that celebrated the beginning of a new chapter in the library’s life in the community.