Long before Eau Claire became a city, its citizens were among the first in Wisconsin to consider the necessity for a public library.

On December 28, 1859, a group of men met at the home of Dr. David H. Ketchum and formed a library association with an election of trustees that included Thomas Barland.  The first librarian was Henry C. Putnam.  Since that 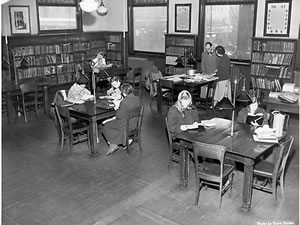 first meeting the public library in Eau Claire has grown from a display case kept in the Mahler and Putnam store on Eau Claire Street, the Carnegie building and eventually to its present location today.

The Public Library in Eau Claire, a history of our library from 1860 through 2009

Rules and Regulations of the Public Library and Reading Room, 1889

Board of Health quarantine card to library cardholders, 1900s 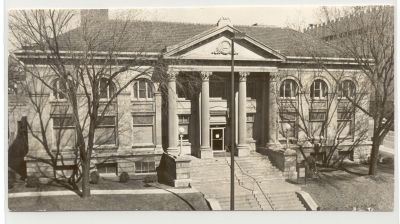 In October, 1901, Library Board President W. J. Starr wrote a letter to Andrew Carnegie to describe Eau Claire and its need for a real library.  In early 1902, the Library Board applied to the Carnegie for a grant to build a library in Eau Claire.  The Carnegie Foundation agreed to provide $40,000, provided that a suitable site was chosen and at least $4,000 a year was promised toward the maintenance of the library.  The city council quickly appropriated the annual money for maintenance, but the “suitable site” became a hotly debated question that divided the city into two factions-the east side and the west side as many letters were written to the newspaper on where to locate the Carnegie building . The north side of Eau Claire did not figure into this dispute over the location of the library, apparently because that section of the community was composed predominantly of laboring people, who did not have as much influence on the affairs of the city at the time.  Debate raged back and forth, but eventually the Library Board sent a letter to the Mayor and Common Council of the City of Eau Claire stated the Boards’ decision to purchase a site owned by Mr. Hinrichs  at the corner of Farwell Street and Grand Avenue.

The new library building’s grand opening was held on April 21, 1904 and on Friday, April 22, 1904. an article titled “Building Beautiful” appeared in the Eau Claire Leader.