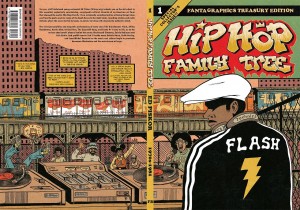 The first thing that caught my eye about Ed Piskor’s graphic novel Hip Hop Family Tree was its size.  It’s rather large and feels substantial and hefty in your hands. It also intrigued me because it has a sort of flat, dated, faded quality to the colors and illustrations. It looks like it represents comics that come from another era. The content of each volume is the specific history a specific time frame in the evolution of Hip Hop culture, its pioneering, MC’s, DJ’s, record labels, graffiti artists, and break dance crews. Originally conceived as a strip that appeared online on the popular website Boing Boing, new one sheet strips are still released regularly in this manner. After the success of those serialized comics, the creator Ed Piskor has brought these first strips together in a accessible set of volumes, Hip Hop Family Tree. Volume 1 covers the 1970’s to 1981 and introduces old school originators like DJ Kool Herc and Grandmaster Flash and the Furious Five.  Volume 2. 1981-1983 sees the music gain its first commercial success with mega-hits like Afrika Bambaataa’s Planet Rock and Grandmaster Flash and the Furious Five’s the Message. Volume 3. 1983-1984 shares the story of Rick Rubin meeting Russell Simmons and them forming the label Def Jam and the rise of artists like The Beastie Boys, Run DMC, LL Cool J, and The Fat Boys. In each volume, Piskor is particularly skilled at including all these big names, but also the minor players that had not insignificant roles in a major movement. His knowledge of Hip Hop’s history is encyclopedic and can be at times can almost seem overwhelming.

I’ve yet to read Volume 3 and look forward to hearing about LL Cool J, The Fat Boys, and Run DMC. All artist whose record I wore out in the early 80’s. So far, I’ve enjoyed Volume 2 the most because it included more long-form storytelling like the chaos that surrounded the production of the groundbreaking Hip Hop movie, Wild Style. I recalled seeing Wild Style years ago, but wanted to see it again with new eyes after reading Piskor’s retelling of its inception. Where would I be able to get a hold of it I wondered? No problem, I just requested it through our library’s Inter library loan service and in a matter of days I held the 2 Disc Special 25th Anniversary DVD Edition!

If you have a few minutes, here’s the trailer to Wild Style:

Hip Hop Family Tree, vol. 2 just won the Eisner Award for “Best Reality-Based Work.” The Will Eisner Comic Industry Awards are prizes given for creative achievement in American comic books, sort of the  equivalent of the Oscars of Comics.  To learn more about this year’s Eisner Awards, see the full listing of categories considered, and see what comics have been recognized in years past go to http://www.comic-con.org/awards/eisner-awards-current-info.

Hope you enjoy reading the richly detailed history of Hip Hop found in the volumes of Hip Hop Family Tree as much as I have!