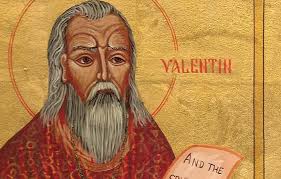 For this was on Seynt Valentynes day,
Whan every foul cometh ther to chese his make,
Of every kinde, that men thynke may;
And that so huge a noyse gan they make,
That erthe and see, and tree, and every lake
So ful was, that unnethe was ther space
For me to stonde, so ful was al the place.

And right as Aleyn, in the Pleynt of Kynde,
Devyseth Nature of aray and face,
In swich array men mighten hir ther finde.
This noble emperesse, ful of grace,
Bad every foul to take his owne place,
As they were wont alwey fro yeer to yere,
Seynt Valentynes day, to stonden there.


Few are aware that Geoffrey Chaucer is the earliest reference we have to Valentine’s Day as a romantic holiday. Chaucer probably sounds familiar but doesn’t really mean more than some guy in history. He lived throughout most of the 14th century and wrote various literary works in what we now refer to as Middle English. You may have noticed the strange spelling of the words in the above stanzas.

A holiday so celebrated, and dreaded, has quite a history, but what do we really know about it? The written word is, aside from anthropological hypothesis, our only way of understanding a past so distant. St. Valentine was indeed the Patron of Love as he was condemned to death for marrying couples in secret. Who better to represent romance and what better place to learn more than your public library?


A Translation by A.S. Kline.

For this was on Saint Valentine’s day,
When every fowl comes there his mate to take,
Of every species that men know, I say,
And then so huge a crowd did they make,
That earth and sea, and tree, and every lake
Was so full, that there was scarcely space
For me to stand, so full was all the place.

And as Alain, in his Complaint of Nature,
Describes her array and paints her face,
In such array might men there find her.
So this noble Empress, full of grace,
Bade every fowl to take its proper place
As they were wont to do from year to year,
On Saint Valentine’s day, standing there.

View All Posts
Guess What I Just Found Out!

Dealing With Dementia
Scroll to top