Nostalgia for the ’80s – Outside Edition

With season four of Stranger Things taking over the world, I feel this is an appropriate time for us to revisit the ‘80s! Because I am a child of the ‘80s it is my opinion that this was the best decade, partially from the nostalgia that I have attached to it, but more so because it was just awesome (totally)! 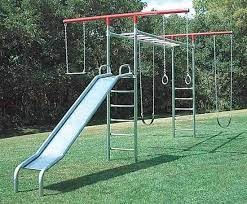 The slide looks smaller than I remember, but perhaps only because I was smaller!

I grew up in a neighborhood where all the kids congregated at one house, usually mine. We had the best playground equipment available at that time. I’m not talking the fancy wooden monstrosities with climbing walls and ropes courses of today’s kids have access to, but the old-fashioned large metal swing set that required a tetanus shot prior to usage. Be careful of those screws holding it together…many an arm and a leg were mauled from those and third-degree burns were common after going down the metal slide. We also had a swing set that just had swings of various kinds and a smaller, “gentler” slide. This one didn’t have as many medical issues but it wasn’t anchored into the ground properly so when one was really pumping hard and close to taking flight, you had to wonder if the whole swing set was going to upend and take flight as well.

If jungle gyms weren’t your thing, we had the best sandbox to play in. I bet you’re thinking the giant plastic turtle and you would be wrong. We literally just had an area where my dad put 2 x 4’s in a square and called it good. Each year we would go to the hardware store and get bags of fresh sand. We had some shovels and sandbox toys but I remember most was playing with some old measuring cups that Mom had decided she no longer needed. We lived in Pekin, Illinois and it was rumored that if you dug through the center of the earth you would end up in Peking, China, so many summer days were spent digging as far as we could…which likely was only a foot or two.

On those hot days, playing in the sprinklers was a must. If you had a Slip ‘N Slide that was even better. But the ultimate sprinkler was the Fun Fountain by Wham-O! The Fun Fountain was a slightly creepy clown (as all clowns are) and his hat would rise up into the air from the pressure of the water. The goal was to run through the water without knocking the hat off.  Now remember this was the ‘80s when child safety wasn’t quite what it is today (remember the tetanus required swing set above) so this hat was made of plastic and when it came crashing down on your head (as it often did) it hurt….a lot!

It was a simpler time and we were typical kids. If we weren’t playing on the swings or in the sandbox we could be found running around, playing kickball, riding bikes, jumping rope. The possibilities were endless and the days were long and glorious. All the parents knew we were around somewhere and didn’t worry as long as we were home when the street lights turned on.

Whether you’re a fan of the ‘80s for the music, the fashion, the hair, or the nostalgia, I hope this has inspired you to get out and enjoy the outdoors this summer and to create some new memories that you can look back on and smile about. This isn’t just for kids, adults can play too! If you need some help figuring out what to do, check out the curated list below!

View All Posts
The Forgotten Tornado: Exploring the Events of June 13th, 1930