A Midsummer Night’s Dream – From the Ballpark

Ever wonder why football and soccer are played in a stadium? Hockey on a rink? Basketball on a court? But baseball, well, that is played in a park!

Yes, a ball park, with green grass, sun shining, fans, and the smells of hot dogs, popcorn, cotton candy, and yes, beer. I still think that going to a game as a kid that the grass was greener than anywhere else, and cheapest hot dog and Frosty Malt would make my mouth water.

One of my fondest memories of my grandfather is when he took my brother and me to a game at MET Stadium in Minneapolis, and there was a long line to buy tickets. He told us to stand back, and proceeded to cut in the front of the line. He told me that no one would mess with an old man. Not sure if that would fly in today’s society, but it is such a great ‘grandpa’ story.

When I was 10, my dad took me to a Twins game, and we saw the first Twins no-hit game by Jack Kralick. Awesome day as a kid! Then I took my girls to a game 10 years ago, and what was the giveaway that night? A laminated poster of that very same game!

Some people say that baseball is boring. Too slow. Dull. With some games, I agree, as it is not the same fast pace of a basketball or a football game. But to me, the game is timeless without a time clock. There are so many strategies on each and every play, in each inning. Where to position your defense? What pitch do you throw? When to sacrifice, steal, hit and run, or pitchout? When does the manager bring in a relief pitcher, or pinch hit for a batter?

This spring has been terrific for local baseball fans. All three local high schools had very successful seasons, with North going to State. The Express and Cavaliers are back in action, and on the major league level, if you would have told me that both the Brewers and Twins were either in first place, or close, at the All-Star break, I’d have thought you crazy. But they are! 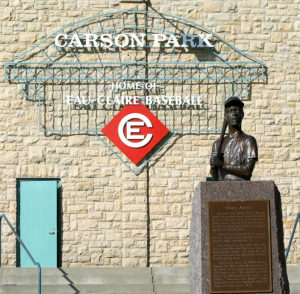 Every year my oldest daughter takes me to either a Twins or St. Paul Saints game for Father’s Day, and it is a day I look forward to for weeks. Win or lose it is always a special day; but if they win it is all the better. This year the weather was perfect, the seats she chose were great, and despite losing it was a wonderful day.

So on a nice summer night, relax, sit back, take a closer look at the strategies employed during the game, and have fun!