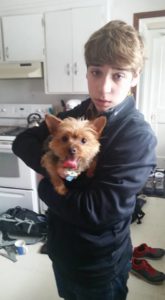 After several years of our youngest son begging for a dog of his own, my husband agreed that we could look into getting a smaller non-shedding dog.  About 6 months ago we added Riley to our family.  He is seriously the most adorable Yorkshire Terrier you have ever met.  Riley is a rescue dog and he was about 3 years old when we got him.  It quickly became apparent that Riley had a few issues.  Although I don’t know much about his life before, he was injured upon being surrendered and he had to have surgery on his tail.  Most of his dog behaviors were bad manner type things and I was confident we could correct them with dog obedience classes and being consistent (thanks Anna at ABCTC!).

However, he had a bigger issue I wasn’t sure I could correct! You see Riley is a growler.  The first time he growl 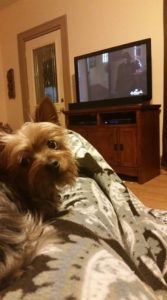 ed at me I wasn’t sure what to do!  I have never owned a growly dog before.  Why did he growl?  Was he just afraid?  Did we startle him?  He also growls during play and while wagging his tail.  What was the difference?  Did we adopt an aggressive dog?  Could he be fixed and live peacefully with our family?  Would I have to break my son’s heart and give his new dog up? What was I getting into?!?!?!?!

In my heart I didn’t think we had an aggressive dog, he clearly was warming up to us fast and loved it when my boys carried him around and snuggled with him.  But there was clearly a bigger issue that we had to solve.  By reading some dog training books from the library and contacting a local trainer (thanks Heather at Embark!) I learned that our 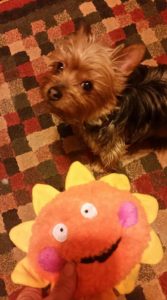 Resource guarding is a natural dog instinct, but if you work on it with puppies you usually don’t have to worry.  We had to recondition Riley to not growl when we approached him or his bone, but to instead think something great is about to happen.  In Riley’s case it’s usually chicken that falls from the sky magically.  Well, Riley hardly ever guards his space anymore. He has learned to trust us and expect lots of snuggles and treats.  He still likes to guard his rawhide bone and Kong Ball but we are getting there.  At least I know those items set him off and can make sure he has them only in supervised settings.  The other thing I have to know is he will probably always growl a little bit, so we need to continue to work on this and reinforce it.

Riley is quite a different dog in just six months, and I can’t wait to see what more training and time with us brings him. We just finished our second session of dog obedience and the difference is amazing!  We plan to do another round of intermediate classes and then hopefully next winter work on some advanced classes.   I am so glad that Riley found our family who had the time and resources to make sure he would succeed and have a forever home.  He is such a happy little dog who is always happy to see us!

View All Posts
Not a Reader? Try Listening!

Memoir of a Fantasy Snob
Scroll to top