I’d like you to meet my cat Ollie and his new friend Dick, an Alaskan sourdough starter. This puzzling moment is brought to you as a result of my interest in a link from Larry’s recent Curiosity Exchange post, On The Rise. It’s a bit of a meandering story, but I promise it comes together happily in the end.

I bake bread a couple of times a week, and I always follow the same no-knead recipe from The New York Times. It’s a tasty rustic loaf and baking it fits into my schedule, but a little more variety would be nice. I love sourdough and have always wanted to make it, just not enough to actually, you know, learn how. I consulted books on making my own starter; I’m too lazy for that. I considered buying a starter; I’d still have to fit a new baking routine into my life. This plan was looking like a non-starter (pun intended). Then I followed Larry’s link to Breadtopia, where I learned you can substitute ¼ cup of sourdough starter for ¼ teaspoon instant yeast in almost any no-knead recipe. Their Artisan Sourdough No-Knead Bread recipe looked similar enough to my existing recipe, and I began to get excited.

I went looking for sourdough starters online. I was vaguely aware that every starter has a heritage. Various strains have been shared among family and friends for generations, and eventually are interwoven with many different peoples’ histories. Google “heritage sourdough starter” or similar search terms and you’ll get all sorts of results: some for sale, some for the cost of a self-addressed stamped envelope. I knew I’d found the starter for me when I discovered the history of Alaska’s Golden Spoon. It’s the starter Dick Proenneke used at his cabin at Twin Lakes, and I am a huge fan. I decided to splurge and ordered it.

Richard Louis “Dick” Proenneke retired to Alaska in 1968 when he was in his early 50’s. There he began work on his homestead by making handles for the tool heads he had brought with him. That’s right, before he personally built his own cabin, on land he had personally cleared, from wood he had personally harvested and transported, the man assembled his own tools. You get the idea. His story is the stuff of dreams for armchair homesteaders like me. He documented his adventure on film, and also in a written narrative. His observations as a naturalist are as interesting as his accomplishments as a settler, and I highly recommend Richard Proenneke’s books and movies in the MORE catalog. 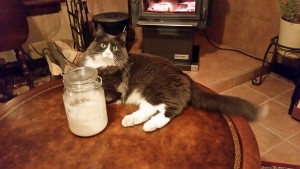 ved my starter-coated spoon and followed the instructions to wake it up. Caring for a starter feels a bit like caring for a pet, like a goldfish. Pets need names, and the choice was obvious. Dick needed to be in a warm place and our furnace was on the fritz, so I kept him on the coffee table in front of the woodstove. When there’s a fire in the stove, there’s a cat near the fire, and when there’s a cat being cute, it’s just a matter of time until a human takes a picture. Before the week was out, Dick was robust enough that I could start baking. My first loaf was pretty darn good, and I’ve tried a few other recipes, too. Sourdough flapjacks are delicious: just like Dick used to make ’em, or so I like to believe. 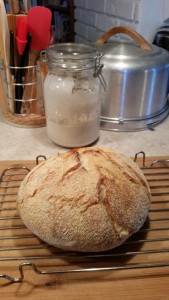 So that’s how Larry helped me get started with starter. We hope you find something on the Curiosity Exchange that sparks your interest. If something shared here starts you on an adventure of your own, even a small one like mine, we would love to hear from you! Please take a few minutes to leave us a comment.

From Film to Video to Disc
Scroll to top