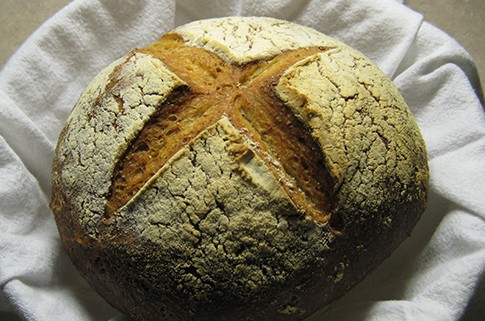 Bread has been an important part of the human diet for many thousands of years, so it is curious to me that at the same time gluten-free has become a life-style choice for some, artisan breads are also on the rise.   I have tasted many artisan breads from bakeries I’ve run across, all the while wondering “why can’t I bake bread like this at home?”  When I’ve tried, the resulting bread was bland, or it wouldn’t rise, or the crust was too thin and pale.  Then I read a newspaper article about Jim Lahey and his no-knead artisan bread.  It was touted as artisan bread for everyone…no fancy equipment, no exotic ingredients, no kneading.  I checked out Lahey’s My Bread: the Revolutionary No-work, No-knead Method from the library and tried his basic recipe, baking a lovely-looking  round loaf (i.e. boule) in an enameled Dutch oven.  I was hooked.  The key, according to Lahey, is using a small amount of yeast and let the dough rise and develop slowly—overnight or longer—in your refrigerator.

After several tries I was getting close, but I still wasn’t getting the airy “crumb” I’d come to know and love.  Then I discovered Peter Reinhart’s Artisan Breads Every Day: Fast and Easy Recipes for World-Class Breads on the library shelf and tried his Pain l’Ancienne recipe.  Bingo!   The techniques were similar to earlier attempts, but now I had the airy texture, the deep dark crust, and the slightly nutty flavor I was after.  All it takes is unbleached bread flour (I prefer King Arthur), instant (not active) yeast, coarse salt, cool water and time.  Et voila!  Artisan bread…consistent in flavor and texture and without fuss.  Now that I’ve been at it awhile, I like to add a little wheat bran to his recipe while mixing the dough (briefly) with my stand mixer and bake it on a pizza stone.

I should mention that an essential element to making this bread is what Reinhart calls the “stretch and fold” technique that replaces kneading.  Check out this YouTube video of the master at work to see how it’s done.  Then, for everything from recipes and tutorials to bread-making equipment and ingredients, I urge you to visit the Breadtopia website.

Care to share your bread recipe successes (or failures)?  I’d “loaf” to hear from you.

View All Posts
Falling into Fall