I admit it, I wasn’t a huge fan of Harry Potter when the series first debuted in America 20 years ago on September 1, 1998.  To be perfectly honest, I wasn’t even aware it existed until around the time the final book, Harry Potter and the Deathly Hallows, was released.  I was “too grown up” to be bothered to spend my nearly-adult time reading about tween wizards.  It wasn’t until I was a library science student in the mid-2000s that I decided to see what the fuss was all about.  However, it didn’t take long (just a few chapters) for me to realize I was going to be a Potterhead for life. 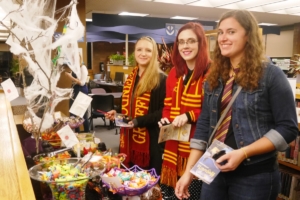 Over a decade later, I’m still a fan.  I listen to the series on audiobook (Jim Dale is the best narrator of all time, in my opinion) and my husband and I watch the film series at least a few times a year.  My daughter, Cate, was introduced to the first film around the time of her first birthday, and I’m looking forward to reading the books with her when she gets a little older.

Why am I reminiscing about HP? Well, “Hogwarts After Dark” is returning for a second year and the library will be hosting a grown-up celebration of all things Harry Potter on Saturday, September 22 from 7 to 10 p.m.  This after-hours event for 21+ and will give long-time Harry Potter fans a sneak peek of the famous wizarding school.  “Early Owl” tickets cost $12 and are available now through September 21 at afterdarkec.org. Tickets will also be available for $15 at the door; cash only. 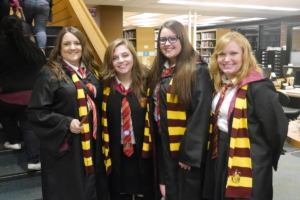 Last year, over 300 Potterheads gathered together to indulge in revelry unseen since Voldemort’s defeat. Popular activities returning this year include “magical” creatures from the Eau Claire County Humane Association, goods from local artisans in “Diagon Alley,” a Horcrux scavenger hunt, a Sorting Hat roast by Clear Water Comedy, themed crafts in the Dabble Box, and transfiguration by TG Makeup & Hair. New magical offerings will include a NEWT-level trivia contest and divination prophecies from a practicing seer. Bewitching brews and muggle food will be available for purchase.

If you are a Harry Potter fan, aged 21 and up, I hope to see you there, and I’d love to learn more about how you came to love the series!

I Used to See the Light
Scroll to top