I admit that I am dating myself, because when I was in school, and you went to the library for research, you stepped up to a large cabinet full of index cards.  For example, if you wanted information about Abraham Lincoln, you searched his last name in the card catalog, alphabetical order in the ‘Ls’, looked at the call number, and hunted down the book.  And yes, at that time, it was only a book, as e-books, DVDs, or even video cassettes were not yet invented. 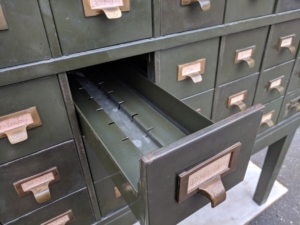 When I assist some of our elderly customers, I ask them if they know or remember how the Dewey Decimal System works.  It often surprises them that the number system has remained the same; what has changed is that the old catalog bank of index cards has been replaced by the computer.  Being the senior member of our terrific reference team, it gives me great joy to assist people who feel intimidated by today’s technology.  For someone willing to sit at one of the MORE Online catalog computers to do their own searching, I am happy to guide them.  If not comfortable, and wants us to do the research, all of our staff are willing to help in any way.

American librarian Melvil Dewey was born on December 10, 1851, and he invented, and helped to implement, today’s Dewey system.  He developed a system that would position and organize shelves in the library in relation to other books on similar topics, putting like library materials by field of study, including philosophy, science, technology, and history.  Before the system was put in place, libraries would often use a permanent shelf space for a book, perhaps place a book on the shelf by release date, or even a random method by each library. 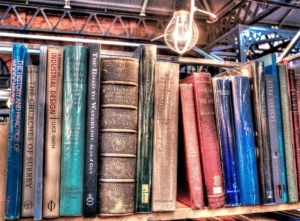 In March of 1876, Dewey received a copyright for the first edition.  After several revised editions, the first abridged edition was produced in 1894, and although there have been revisions since then due to expanded categories, that version pretty much exists today as it did then.  The system grew quickly, with over 96% of public libraries on board by 1927.

Not sure how the Dewey System works?  Just ask pretty much anyone working at the library, and they can assist you.

Finally, on a light note, check out the book ‘Dewey: The Small-Town Library Cat Who Touched the World’, written by Vicki Myron.  It is the story of a young kitten placed in the book return slot on the coldest night of the year at the Spencer Public Library in Iowa, who then became a source of pride in this small town for the next 19 years.  You will find it upstairs in our non-fiction section, (Dewey call number 636.80929 M997d).  Enjoy!

View All Posts
A Hibernating Hobbyist