Let’s Print Something, But Leave The Paper!

Ever since I first heard of the concept in the early 2000s from a Popular Science article, I have been fascinated with the concept of 3D printing. It’s no surprise then that I leapt at my first opportunity to purchase an affordable printer as soon as they were marketed for consumer use. I have an M3D if you’re at all curious. I soon found myself delving into the convoluted world that is 3D printing, looking for software to make models, finding amazing models made by others to print, fixing complex and broken models, challenging the limits of my printer, etc. I even carried around a printed model with me for a while readily available to share with anyone who expressed any interest. I know, nerd alert!

Alas, my excitement was soon quelled as I found almost every person I talked to had the same question in regards to my printer. “Why?” At first, I really didn’t have an answer. My only response was, “Why not?” It’s fun! The only difference between men and boys is the size and price of their toys, right? But then it started to bother me. What the heck is the point? So, I started to search for a reason.

First, I wanted to prove that 3D printers are quite valuable to society as a whole. That didn’t really justify my purchase of a personal 3D printer by itself, but it certainly justified my interest. Real world applications have already had some incredible breakthroughs. We have 3D printed casts that can allegedly increase bone healing by 40-80%. There is the new field of bioprinting which is working on applications including printed skin, cartilage, nerve cells, and even organs. Space travel has one less concern in broken parts as we refine the processes of 3D printing in space and have already successfully printed functional objects on the International Space Station. It will require less frequent launching to send up small items such as a wrench needed for a repair. It will hopefully cut costs and improve the potential for more improvement in space exploration, such as the Mars mission we hope to achieve by the 2030s. The possibilities are absolutely mind blowing in regards to the potential this technology has for many important fields.

Government and medicine are not the only areas of rapid 3D printing exploration. Many companies are already playing with the technology and coming up with some somewhat gimmicky, but still really cool ideas. There is one company now printing full sized furniture from a huge 3D printer. Two competing companies, WinSun and HuaShang Tengda, have started 3D printing homes in as little as a month and a half. That’s nearly a quarter of the time it takes to make a standard home in the United States. Everything from tools, to clothing, to collectible miniatures are now being manufactured via 3D printing. There are even a few companies, like Shapeways and iMaterialise, that will allow you to send them a 3D model and have them print it in whatever material you request. The materials range from the typical plastics like ABS to resin, wood, cork, ceramic, porcelain, sandstone, and even several metals including aluminum, steel, copper, silver, and gold. There is obviously a market if so many companies are willing to traverse these financially treacherous waters.

As I stated before, this doesn’t really justify my personal ownership, so the quest continued. After printing off various trinkets and tchotchkes – yes I’m aware of the redundancy, but it’s alliterate – for family and friends, I finally realized its potential. The 3D printer is the ultimate tool for the lifehacker. I found a “thing” on Thingiverse, a well known source of 3D models under the creative commons license that allows users to view and download them for free. 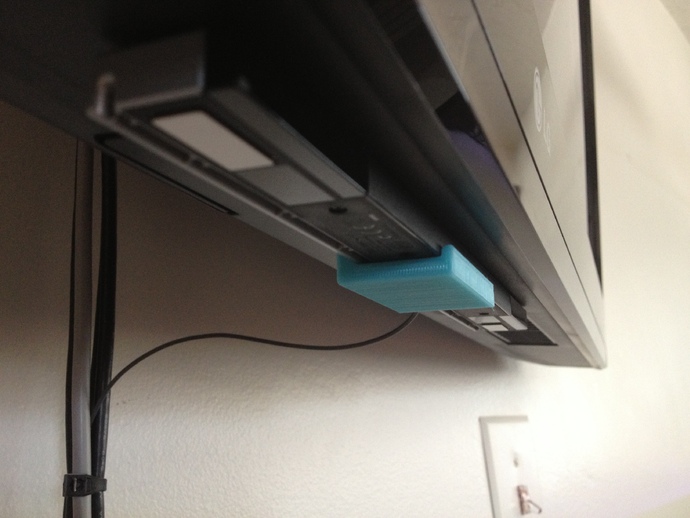 My breakthrough was a bracket made for LG televisions that allowed me to attach my Wii sensor bar to the bottom of my mounted TV in the living room. This may seem a bit ridiculous to some, but those people have obviously never had to fight the never ending battle of securing that forsaken plastic bar with a dozen failing methods that ended in either falling hazards or breaking out the Goo Gone to clean up the sticky mess of whatever method of adhesion that had failed. I have since found a few more applications that are more practical including cookie cutters, an SD card holder, various hooks and stands, and anything else that sparks an idea. My use of the 3D printer can certainly be described as a roller coaster ride of consistency, but I will never find that I have lost all need of it. I will continue to explore the possibilities and keep my eye on the 3D printing industry for what amazing feats it has yet to accomplish.

P.S. We now have a 3D printer at the library that will be part of our exciting new project, the Dabble Box!

View All Posts
My Favorite 2016 Reads

Get To Know Your Library
Scroll to top