You heard me! Santa has been heavily influenced by traditions surrounding Odin, the Norse god of the Norse gods, a.k.a. the Allfather. As I write this, I imagine many readers with a cock-eyed expression indicating a skepticism that the two seemingly different beard-laden individuals could have much in common aside from their facial hair. The truth is, there can be little doubt that Odin’s lore has factored into Santa as we know him today.

Here’s the down and dirty on the comparisons. 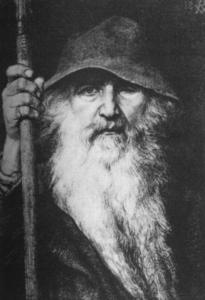 Though it’s quite obvious that Santa has influence from Odin, we can’t ignore some of the other obvious influences such as Saint Nicholas of Myra and the Dutch Sinterklaas.

A few other traditions that Christmas has borrowed from Norse tradition include tree decoration, mistletoe, and wreaths.

Information from this post was gathered from both my personal interest in the subject and this article. The article contains more details with comparisons between the two as well as many references to more resources on the subjects of Odin, Santa Claus, and Norse Mythology.

Can I Love Harry Potter But Not J.K. Rowling?
Scroll to top