Springtime, As Told By Greek Mythology

While perhaps unintentionally, T.S. Elliot captured the spirit of Wisconsin winter brilliantly when he said: “April is the cruelest month”. That is to say, April is a cruel month as it can project hints of spring, renewal, and hope during warmer days. Then, it can tear it all away again with sudden cold temperatures. If you’re looking for someone to blame for the woes of this cruelest month, you could project your frustrations onto mother nature, or your own strange choice to live in the Midwest. Myself, I throw common sense out the window and curse Persephone, the Greek goddess of spring. 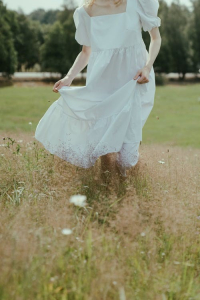 Persephone was said to be one of the most loved goddesses in Greek mythology. This was because she brought greenery and life to the mortal realm every spring, and a bountiful harvest meant more wealth, food, and better living all around for mortals. For more context, she was the daughter of Zeus (god of sky) and Demeter (goddess of agriculture).

Persephone was gathering flowers in the Vale of Nysa when Hades, ruler of the underworld, appeared before her. He was so smitten with her that he captured and dragged her back to the underworld with him. (Rude, I know.) Whether or not Persephone was held against her will, or eventually learned to love Hades has been disputed throughout Greek mythology. My theory is that perhaps she stayed to accompany his three-headed dog, Cerberus, because who wouldn’t love a puppy with 6 ears to scratch?

Persephone’s family was so crushed by her disappearance that they neglected their duties to the people. Crops failed, and the mortals starved. Once Persephone’s location was uncovered, she was released back to her mother and her people. However, she had eaten the food of the underworld: a pomegranate. This meant that she also still belonged to Hades and the underworld. A compromise was found, and for a fraction of the year (spring, summer) we are blessed with warm weather as Persephone bestows the earth with life and renewal. For the other seasons (fall, winter) you may find comfort on cold days knowing Persephone is with Hades in the underworld, likely playing fetch with Cerberus, the 3-headed dog.

If you’re interested in Greek Mythology, (or mythology of any kind) the library has plenty of resources! You can start with any of these titles here:

View All Posts
At a Garage Sale Long, Long Ago

Books a Taurus Would Love
Scroll to top