As we march into the 21st century, more and more services and resources are migrating online, from virtual education to tax preparation and information gathering to recreational outlets.  Libraries have always been carriers of information; over time, they have simply evolved from housing texts on clay tablets to offering limitless resources on today’s mobile tablets.  Having been born during the Millennium generation, I have gone from using textbooks, pencils, and notebooks in school to solely relying on a computer for my entire graduate school program.  Figuring out how to use smart phones and iPads has come rather naturally to me, as I grew up using computers and learning how to type at an early age.  However, this is not the same story for many others. 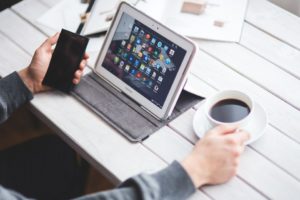 Technology services  such as scanning, copying, faxing, and printing are all available at the library.  Did you know that we have two copiers, one fax machine, one scanner, Wi-Fi, and several wireless printers throughout the library just for public use?  We also offer 26 computers with Internet access and several other non-Internet computers.  The latter of these are great for doing homework, creating résumés, or typing up other documents if you don’t need the Internet.  However, if you still need to access the Internet outside of the library, we provide circulating iPad Airs and will soon be offering WiFi HotSpots for checkout.  What’s a Wi-Fi Hotspot?  Oh, just a portable device that simply generates internet wherever you are… Pretty cool, right?

For those of you who simply want help using your own mobile devices, such as laptops, tablets, smart phones, MP3 players, or eReaders, you’re in luck.  We offer such assistance on the second Tuesday of every month from 2 PM – 4 PM; just drop in sometime between those two hours for some one-on-one help.  Common topics covered during Tech Tuesday sessions include downloading eBooks, saving pictures, using social media apps (e.g. Facebook), accessing email, etc.  If that Tuesday doesn’t work for you, we can schedule an appointment on any other Tuesday of the month at 10:00 AM or 6 PM.  Just give us a call at 715-839-5004 to get penciled in.  Not as many people make Tuesday night appointments, so if you’re free and need some tech help, just give us a ring!

View All Posts
Everyone Belongs Here

Sleuthing Up Some Fun
Scroll to top