All I am going to say about the upcoming election is to please vote. Do yourself a favor if you do wish to vote, and make your plan. If you choose to vote on election day at your local polling place, I suggest you double check the location. In Eau Claire, my ward voting location has changed in each of the last 3 elections. The first was due to COVID-19, and the second I do not know why.

Should you wish to vote absentee, great! Just know the local laws, rules, timelines, and dates that are required. Questions? Call the Eau Claire Elections Office at 715-839-4913. Again, please make a plan, understand the current laws, and do not leave your vote to chance.

Nothing political here, I promise. Just some interesting, and I admit, a sometime odd history lesson on voting in the United States. Yes, we were taught early on in school that we are the land of the free, and home of the brave. Yet, in the first Presidential election in 1789, voters were almost all Protestant white males that owned land. Not exactly the land of the free for women, Blacks, Asians, Native Americans, or non-land holders.

OK, I did say nothing political here, but unlike today’s Congress, our Founding Fathers really knew how to compromise. The North wanted slaves to count more than the South did, as the goal was to determine taxes paid to the states by the federal government. But regarding representation in Congress, the South wanted slaves to count more than the North did. The Compromise in 1787? After a long debate, what was agreed upon was to count ‘all other persons’ as only 3/5 of their actual numbers. For what we call the Census today, whites counted as 1, where slaves counted as Three-Fifths.

There were movements within states to end these restrictions, starting in 1792 when New Hampshire became the first state to end any sort of landowning requirement. But not until North Carolina became the last state to do so in 1856 did this idea come to an end in the USA.

But while voting rights were expanded for some groups, states also began to enact laws that barred women, African Americans, Native Americans, and many immigrants from being allowed to cast ballots. In 1776 New Jersey allowed ‘all inhabitants’ to vote, but in 1807 passed a law barring women from voting. 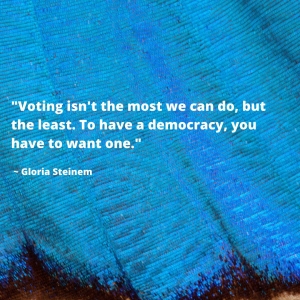 1821 saw New York required Blacks voters to own property worth an amount that more or less banned them. In 1882 the Chinese Exclusion Act prevented Chinese immigrants from becoming citizens, thereby blocking them from the polls.

After slavery ended, the Fifteenth Amendment in 1870 gave all men, regardless of ‘race, color, or previous condition of servitude,’ the right to vote. However, many southern states tried to suppress Black voters by intimidation, poll, taxes, and even literacy tests. Nearly all African Americans had been effectively blocked in the early 20th century.

During this time period, women were also demanding their right to vote. Women had started this movement in the early 19th century, but with slow progress. Wyoming was the first state to grant women the right to vote in 1890, and by 1918 women were legal to vote in 15 states. However, it was not until the Nineteenth Amendment was passed in 1920 that gave women the right nationally. Side note: It was ratified when Tennessee approved the measure by one vote, becoming the 36th state to pass it; the victory was ensured only after a 24-year-old legislator changed his previous vote at the request of his mother, who told him “to be a good boy.”

In 1964 the Twenty-fourth Amendment was adopted, prohibiting poll taxes in federal elections. The following year the Voting Rights Act was signed; this landmark legislation banned any effort to deny voting rights, such as literacy tests. In Mississippi alone, voter turnout amount Black people went from 6% in 1964 to 59% in 1969.

Please know and understand our history, and how long and hard so many people had to fight (often literally) for this right. Do vote, as there are millions around the world that are still denied this basic right that Americans have.

Wisconsin Disability Vote Coalition According to the American Association of People with Disabilities, approximately 23% of the electorate this year will be voters with disabilities. If you’re a voter with disabilities in Wisconsin, here’s what you should know.

Rock the Vote Find all the deadlines, dates, requirements, registration options, and information on how to vote in your state.

Absentee Voting in Eau Claire If you are unable or unwilling to go to your voting site on Election Day, you may cast an absentee ballot. Note that there is no Absentee Voting on the Monday immediately before the election.

View All Posts
Ode to an October Classic: The Pumpkin Smasher