A Night in the Lonesome October, aka “The Perfect Spooky Book for Autumn” 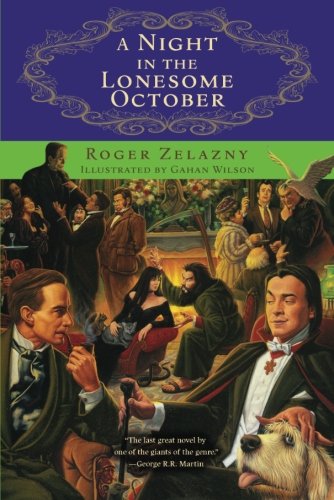 October’s not over, and if you’re looking for the perfect book to read in these last chilly evenings as Halloween draws near, I have a suggestion. In fact, if you were to ask me, Hey, what’s the perfect book to read each October?, I’d gladly reply, Hey, thanks for asking, that means a lot. Well, I’m no expert, but the answer is probably A Night in the Lonesome October by renowned sci-fi and fantasy author Roger Zelazny.

If you’re like me when I first read A Night in the Lonesome October a few years ago, and you’ve never heard of Roger Zelazny, fear not. Here’s a primer:

Anyway! A Night in the Lonesome October was the last novel Zelazny published before he died in 1995. And I’m really glad he wrote it.

Over thirty-one chapters, you follow the story of Snuff, a big, shaggy guard dog, as he assists his master Jack in preparing for a battle of supernatural will (on Halloween, of course) to either contain or release unthinkable Eldridge horrors upon the world. Snuff and Jack—along with a creepy cast of strange characters and their animal familiars—have descended upon a small town outside of London, England. This will be the site of their big event, and everyone has much to do. Told from Snuff’s perspective (he’s the narrator), you meet everyone through his nightly outings to spy, sabotage, and make alliances.

Most of the characters are directly based on famous literary personalities. (Dr. Frankenstein, anyone? Jack the Ripper? Sherlock Holmes?) But the heart of the story rests with their animal companions who seem smarter than any of the humans (and almost-humans) involved.

The book is just wonderful. It’s dark and mysterious and quirky and fun. There’s no gore and nary a jump scare, but you’ll find twists and tension and terror and did I mention the main character is a really cool dog?

See if you can find a copy before Halloween and dig in.

And one more thing: don’t let the cover sway you one way or another. It’s got a very slick ’90s look to it, and it doesn’t really capture the vibe of the story. However, the weird, wobbly illustrations by Gahan Wilson found throughout the book more than make up for the cover.