In April of 2019, I wrote a blog about how musicians and bands came up with their names titled “Who is Jethro Tull”? Our world-famous webmaster told me that for some odd reason, people still look at this. So here is part two.

As a teenager in the late 1960s, The Monkees were a hot TV show and group. Frontman and lead singer of The Monkees? Davy Jones? His real name was David Thomas Jones.

David Robert Jones was also an English singer-songwriter in the 1960s. Because the aforementioned Davy Jones of the Monkees had just become popular, this singer then changed his name to David Bowie.

As a tribute to our long time circulation employee Greg G., who is a huge Rolling Stones fan, and has seen them in concert several times, this is for you:

In June of 1962, when Brian Jones was still a member and asked by a journalist for the band’s name, he saw a Muddy Waters LP lying on the floor, and one of the tracks was “Rollin’ Stone.” The 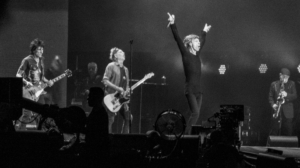 group played their first show billed as ‘The Rolling Stones’ on July 12, 1962. Shortly after, the band began their first tour of the UK, gaining popularity, and by 1964 two separate polls rated the band as England’s most popular, even over The Beatles. Fond memories of Charlie Watts, longtime drummer who passed away last month. Who knew Mick Jagger went to the London School of Economics?

Roger Daltrey, leader of The Who, started a group called The Detours in 1959. In 1964, with Pete Townshend now on board, he and his roommate Richard Barnes spent a night considering names, focusing on a theme of joke announcements, including ‘No One’ and ‘The Group’. Townshend preferred ‘The Hair,” and Barnes liked ‘The Who’ because it “had a pop punch.” Daltrey chose The Who the next morning.

Before they became a ‘70s pop sensation, the Doobies were a bunch of hippies living together in a house in Northern California. When they were in search of a name for their band, a non-musical housemate suggested the Doobie Brothers because of the members’ penchant for smoking weed. (“Doobie” was slang for a joint at the time.)

Buffalo Springfield? Stephen Stills and fellow band member Richie Furay chose their name from a random brand of steamroller seen parked outside their home at the time.

Chicago was initially ‘The Big Thing,’ but manager Jimmy Guercio changed it to ‘Chicago Transit Authority,’ honoring the bus line he took to school. Shortened to ‘Chicago’ after their first album.

Bernie Leadon is often credited with coining the name ‘Eagles’ during a drug- and alcohol-enhanced group trip to the Mojave Desert. There, Leadon recalled reading about the Native American Hopi tribe’s reverence for the eagle. However, J.D. Souther suggested the name stuck after Glenn Frey shouted out “eagles!” when they saw some flying above them in the desert.

Unsurprisingly, The Grateful Dead came up with their name while tripping. Paging through a folklore dictionary, Jerry Garcia stumbled upon the term, which related to the soul of an unburied dead person expressing karmic gratitude to someone who arranged for their eventual burial.

While attending Ealing Art College, Farrokh Bulsara became friends with Tim Staffell of the local band Smile. Bulsara, who’d later call himself Freddie Mercury, shared a common taste in music with Tim and became a fan of Smile. In 1970, Bulsara joined the group after Staffell left for another gig. He then encouraged the remaining Smile members to change their name to Queen. They performed their first gig that July. Check out the movie Bohemian Rhapsody. Awesome performance by Rami Malek as Freddie Mercury.

Named for manufacturer Ransom Eli Olds, the REO Speed Wagon was introduced in 1915 as a groundbreaking predecessor of the pickup truck. Fast forward to 1967, and keyboardist Neal Doughty learns of the name, taking it for his newly formed band.

Steppenwolf producer Gabriel Mekler reportedly suggested that The Sparrows change their name to the title of Herman Hesse’s 1927 novel, and the archetypal biker-rock band was born. The German author’s book details a struggle between his human and animal dual natures, making “Born to be Wild” a perfect song to listen to while reading.

Pink was born Alecia Beth Moore. She started performing in clubs when she was about 14, and adopted that stage name about that time. That had been her nickname for some time, and initially it was a “mean thing.” She took the name from the Mr. Pink character (played by Steve Buscemi) in Quentin Tarantino’s movie Reservoir Dogs.

My all-time favorite group is Earth, Wind, & Fire.  Leader Maurice White led a group called Salty Pepper (his astrological sign being Sagittarius). With that sign having the seasonal and elemental qualities of earth, wind, and fire, the name was born in 1970.

Do your own research on Steely Dan. Not sure if it is fit for this family publication.

Remember, many of these musicians groups and musicians have CDs you can checkout from your library. Also, take a look at our digital music services, Freegal, which has access to over 15 million songs (you can download 5 FREE per week and stream music 24 hours a day, 7 days a week with your Eau Claire library card) and don’t forget about Sawdust City Sounds, our library’s platform for your local favorites.

View All Posts
Not here? Never fear! (What to do when the item you want isn’t in the...

A Night in the Lonesome October, aka “The Perfect Spooky Book for Aut...
Scroll to top