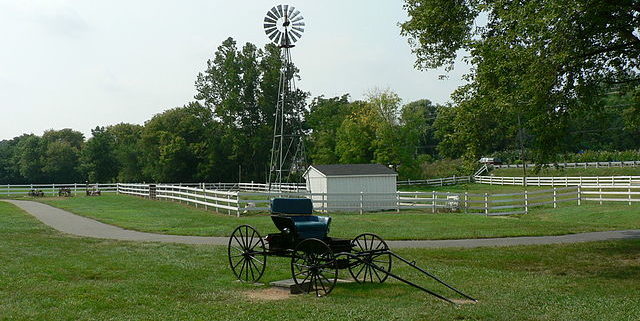 Amish Romance is a new genre for me and one I haven’t been interested in until recently.  It’s such a big genre and I have just started to explore it.  My interest started on a whim when I picked up a new book here at the library that had a cute title and attractive cover.  It was Huckleberry Hill by Jennifer Beckstrand and it was the very first Amish romance novel I had tried.

Huckleberry Hill was adorable and I was instantly enchanted.  The story featured an old Amish couple, Felty and Anna Helmuth, who had raised 13 children and were now enjoying their grandchildren.  Anna is becoming concerned about her grandson Moses, who was still trying to get over his fiancé who first jilted him and then moved away and left the church.  Moses has decided that protecting his heart is very important.  Anna has other ideas and introduces Moses to Lia Shelter whose parents keep her busy because they feel her job is to take care of them and not to get married.  Moses and Lia learn together that they are capable of more than they thought, and that love is not something they have to give up.  Huckleberry Hill is the first in a series and I suggest reading them all!

Jennifer Beckstrand’s newest series launched this summer.  The first book Sweet as Honey was just as delightful as the Huckleberry Hill series.  Book one features Lily, her sisters and their maiden aunt.  They are beekeepers and sell honey from their farm.  Lily feels obligated to her boyfriend of many years, because he was nice to her when she was having a hard time in her life.  However, the tables are turned and now he doesn’t treat her very nice at all.  In fact, in many ways, he is taking advantage of her good nature.  The other two books in this series (A Bee in Her Bonnet and Like a Bee to Honey) will be out later this summer, reserve your copies now!

Interested in learning more about Amish Romance and Fiction?  Check out our Readers Corner guide here!  I would also like to know what author you think I should try next!