For the past sixteen days, I have been raising caterpillars in our kitchen. On June 28, my 5-year-old came home from the last day of her Chippewa Valley Montessori summer school program with a small empty ice cream container with a hole covered by window screen and a handout on finding caterpillar eggs and fostering them through to flying Monarchs. Fortunately for us, we have a large crop of milkweed growing along the western edge of our house, and fortunately for the butterflies, I did not commit the same error in judgment that I had the previous spring by yanking all of the milkweed out of the ground thinking it was a weed. (A common error I was told a few weeks ago by a self-titled Ninja Gardener who is educating groups around the community about preserving the plants that attract bees and butterflies). A PSA for all of you – do not pull your milkweed!

The following consists of excerpts from the journal I have been keeping for the past 16 days, a process inspired by the information provided by the Texas Butterfly Ranch site that I have been referring to daily for inspiration, information and motivation. A disclaimer: I am not an entomologist, so please forgive any blunders or ignorance that may appear throughout my entries.

Day 1 July 1: Found 3 itty-bitty caterpillars on three leaves of milkweed, placed them in the bucket, and hope they’ll still be alive by tomorrow. I fear my lack of green thumbs might extend to successfully raising butterflies. 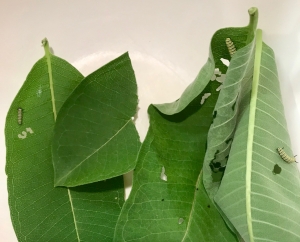 Day 3 July 3: We have two new unsuspecting creatures squirming about the leaves. Added some new leaves and cleaned out the powdery frass. The three original caterpillars are doing well.

Day 5 July 5: No time to clean. Shoved some fresh leaves in and hoped for the best.

Day 6 July 6: 3 growing larvae, 2 translucent escapists, and down to only one egg. Moving them to a new habitat using egg carton and floral tubes, inspired by a rig I found online. Got the floral tubes at Eevy Ivy Over Floral for .25 each. Good deal. Hope this system works to keep the milkweed fresh.

Day 7 July 7: Cleaned the frass and filled the floral tubes with fresh water. Everyone is getting bigger. Found Herman, one of our little escapists, hiding within one of the shriveled up leaf fragments used to transfer them from their old habitat to their new. I am beginning to suspect that he is NOT a Monarch larvae. And the other egg that hatched a few days ago looks a bit too bright green and they don’t seem to enjoy snacking on the milkweed. 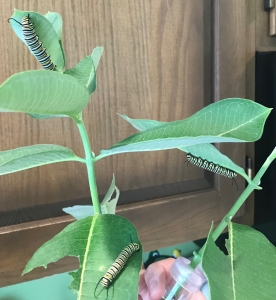 Not so Little Anymore

Day 8 July 8: The long and skinny larvae, Herman, and his other outlier friend turned out not to be monarchs, but were identified as Tussock Moth Caterpillars, and although they could have shared the habitat with the Monarchs, they were gently placed on some leaves in our backyard where we bid them adieu. We had an egg hatch in the larger makeshift lepidopterarium this morning and it looks like its larger friends, now named Nessa, Gerald and Derek. Our new friend has been dubbed Derek Jr. Mazel Tov by the 5-year-old.

Day 9 July 9: Derek Sr. crawled onto the side of the lepidopterarium and had to be lured off with a new leaf. Nessa grew a lot during the day and Gerald consumed half a leaf! Derek, Jr. was getting along nicely and was granted three new siblings. Three! Picked all new milkweed and placed new friends on fragments on top of full leaves. Did the same with the three originals. And brought in one new egg. And found a cluster of golden eggs on the bottom of a milkweed plant, but let it be. Perhaps some kind of leaf footed bug? Cleaned tubes and emptied container of LOTS of frass.

Day 10 July 10: Now have five little caterpillars after all four eggs gathered yesterday hatched!  And the three originals are getting bigger by the hour.

Day 13 July 13: In three short days, Derek, Nessa and Gerald have become monsters and their frass is HUGE. They destroyed two milkweed plants in the night, but fortunately left the third plant holding the five growing larvae be. Got them two new clippings and had a few mishaps transferring them from their leaf fragments to the new clippings, including some frass dripping onto the floor and dropping poor Derek a couple of times on his fragment into the egg carton. Am anticipating having to give them more fresh milkweed after work today, and am starting to fear that they might eat through the screen and start consuming our kitchen appliances.

Nessa in a “J” Shape

Days 14 – 16 July 14-16: On Saturday morning, I noticed that Nessa was just staying put on the screen and grew concerned that she had contracted some rare caterpillar disease. As I went about my business, I kept checking back on her, worrying about her health and thinking I had done something wrong. Then I noticed she was spitting out some silk and attaching herself to the screen. She dropped down into the desired “J” shape, and by the time we awoke Sunday morning, she was in her chrysalis. Meanwhile, Derek was freaking out all day Saturday, disturbing the four small Cats as he wandered around trying to find a place to take root. I noticed a strange behavior from the four little ones, which involved them lifting up their heads and wagging them about in sync as Derek roamed around the milkweed they were sharing. By evening, Derek had dropped into a “J” on a leaf of milkweed. That just left Gerald, who was wandering around on Sunday and looked like he was going to opt to form his chrysalis on the bottom of the egg carton. I tried to reason with him, but by the time I woke up Monday morning, he had formed his “J” off the bottom edge of the carton and appears to be in it to win it. Of the five Cats remaining, only four survived the weekend. We were very disheartened to see that the littlest one failed to thrive. Derek Jr. Mazel Tov has made great improvements, and his three smaller mates are doing well. 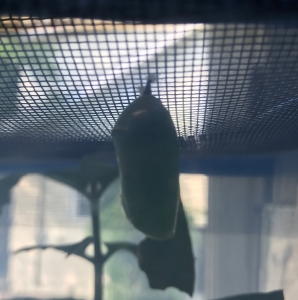 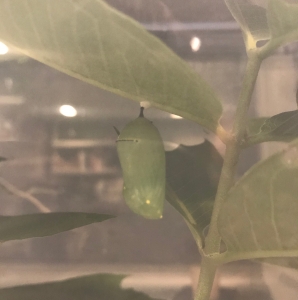 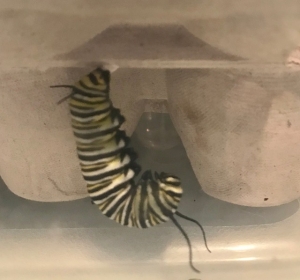 Postlude: If you are curious about how this experiment plays out, please visit me at Information & Reference and I will be happy to share the rest of the story.

View All Posts
The Art of the Interview

Reading with the Stars
Scroll to top