Book Review: It’s What I Do

It’s a calling. It’s something that sort of takes over who I am. People ask me why I do this and it is what makes me most alive. It is what I believe in. It is my happiness. And it’s what I do. – Lynsey Addario

What would compel someone to travel to distant lands, leaving their family and a safe, settled life behind, to work as a photojournalist and witness 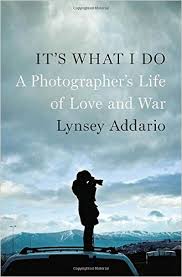 some of the most dangerous situations on the frontlines of war-torn countries throughout the world? This is the central question in Lynsey Addario’s compelling memoir It’s What I Do: A Photographer’s Life of Love and War.  I recently listened to the audiobook version and found it a satisfying, often times harrowing, and thoroughly informative listen. Adarrio shares both the danger she encounters documenting these war torn locales, but also the lack of respect she felt from some of her male colleagues and the preconceptions about American women she encountered among the cultures she was photographing.

Addario has a Wisconsin connection. She is a 1995 graduate of the University of Wisconsin-Madison who majored in International Relations and Italian. Though it has become her life’s work, she never studied photography at the UW. She did immediately apply her knowledge of international relations though, and began working as a freelancer for the Associated Press soon after graduation. Eventually she found herself in Afghanistan in areas controlled by the Taliban.  She has gone on to work as a photojournalist throughout the Middle East and Africa. Returning time and again to hotspots like Iraq, Libya, Darfur, and the Republic of Chad. She won the MacArthur Fellowship in 2008 and was part of the New York Times team that won a Pulitzer Prize for International Reporting in 2009. Some of her amazing photos and the articles that accompany them can be viewed on her Official Website.

One particularly disturbing portion of her memoir deals with her being taken captive in Libya and held hostage with three other New York Times correspondents. That episode, excerpted from her memoir in the New York Times magazine caught the attention of Hollywood producers, who quickly optioned her book and began adapting it as as a script that is slated to star Jennifer Lawrence and be directed by Steven Spielberg.  So here’s your chance to read the book before the movie is released.

If you’d like a riveting read, one that challenges you to question how we view other cultures, offers compelling war reportage, and inspires you with a story of overcoming great obstacles to further one’s life’s passion, then It’s What I Do is highly recommended.

View All Posts
Get Caught Reading

Game On!
Scroll to top