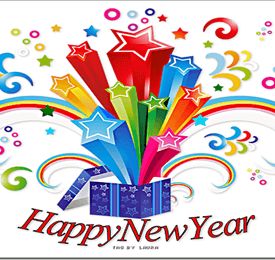 I know it is not quite here, but it is close. I am looking forward to 2016, as this year has not been the best I have ever had. For me 2016 is bright with promise, a new beginning with all sorts of possibilities. Nearly everyone considers New Year’s as a time to reflect on the past year and a time to make resolutions for change in the coming year.

The practice of celebrating the New Year started in Babylon, where there was an 11 day festival in the spring. Later Julius Caesar moved the celebration to January. It’s pretty much been January ever since.  Food, of course, is a very important part of the celebrations. Some foods considered “lucky” to eat during the festivities include: Circular shaped foods, Black-eyed peas, Cabbage and Pork – See more at: http://wilstar.com/holidays/newyear.htm.  And don’t forget to sing “Auld Lang Syne.” As this is Scots I don’t really know what that means, but most interpretations say the song is about remembering old friends, which at the cusp of the New Year is a very nice thing to do. Get more information about the song and the lyrics at https://en.wikipedia.org/wiki/Auld_Lang_Syne .

My New Year’s resolutions are pretty simple this year. I am going to try and eat healthier and exercise more. I used to say I would lose 30 pounds and exercise 3 times a week. I have found over time that for me resolutions that are too ridged don’t last long. With a more general resolution, I can keep trying for the whole year without saying darn it and quitting because I fell off the diet wagon or didn’t exercise like I was supposed to.  If you are like me, give yourself a break from unrealistic resolutions. By making them achievable, anyone can succeed.

I know that many out there will disagree with me, if for you a finite goal works, I say go for it! But for those who find that a difficult path to take, try an easier one. Make one change, see how it goes and then maybe try another one or not.  Just do what is right for you.

To that end I wish everyone a very Happy New Year, may all your dreams and hopes for 2016 come true.