Reading Behind the Wheel

When I moved to from Eau Claire to Chippewa Falls nearly two summers ago, I began to wonder what I would listen to on the ride to work.  Previously, my commute only took 10 minutes, which was fine for fiddling around with the radio.  My new route, however, accounted for a full hour driving each time I went to the library.  I needed something more engaging to listen to than music and radio ads.  I decided to give audiobooks a shot, even though I had my reservations. 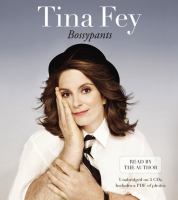 The first audiobook I checked out was Tina Fey’s memoir Bossypants.  To my delight, I was able to sink into the story within minutes, often smiling or laughing out loud as she described some painfully awkward, yet hilarious situations.  I soon discovered that I had no problem paying attention to the road while my ears listened along.  I came to realize that it was far easier for me to follow a storyline than to talk to another passenger while driving.  After Fey, I decided to stick with some other author-narrated audiobooks, such as memoirs penned by Amy Poehler and Jim Gaffigan.  Their voices matched their personalities and, as such, made the material that more enjoyable to listen to.

I finally decided after a bit to give nonfiction audiobooks a try.  You see, I was hesitant.  I envisioned a narrator who spoke in a monotone and droned on and on without changing pace, inflection… or… (there goes my attention!)  However, I settled on Sheryl Sandberg’s Lean In:  Women, Work, and the Will to Lead after seeing her in an interview.  Although the work was not narrated by her, I was pleasantly welcomed by a voice actress that read in such a genuine and earnest manner that I felt as if Sandberg herself was reading.  I did have to make a little more effort to pay attention to the content, as it was not a rollicking fiction book or a humorous account of someone’s own life.  The experience was rewarding, though, and I learned much that was serious food for thought.

Since then, I have come to love finding a good audiobook and embracing the extra time spent behind the wheel.  I used to groan when I knew I would have to stop at a few places along the way home from work, but now, I fist-punch the air and think “Yes!  More time to listen to my book!”  The downside of this, though, is when I pull into the garage in the midst of a revealing conversation or pivotal moment in the story and think to myself, “I’ll simply have to wait until tomorrow…”