A Commendable Spectacle: The Renaissance Festival

HEAR YE, HEAR YE…IT’S FESTIVAL SEASON! Huzzah! I refer not to the many summer music gatherings (stop being such a normie), but to the nerdy entertainment extravaganza that is a Renaissance festival: a seasonal fair set roughly in the theme of a fantasized renaissance-era Europe. 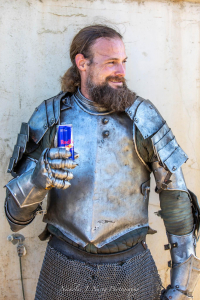 Common to all Renaissance festivals is the great variety of entertainment on offer: interesting characters to people-watch, bawdy comedy with references to history and Shakespeare, riddles to get your Ravenclaw on, jousting sprinkled with pro wrestling humor, mermaids and fairies, games, storytelling, acrobats, daredevils, and dancers of all sorts. Participants combine an appreciation for history with a healthy dose of fantasy and humor. While historical accuracy is respected, no one is going to judge your costume as long as it is creatively conceived and joyfully executed. Last year, we admired a knight who sidestepped the expense of chainmail by wearing a crocheted set – we dubbed him ‘The Knit Knight.’ The creativity and craftsmanship on display by both vendors and visitors are what make it worth going back to the festivals each year, even after seeing most of the stage acts and developing a mental map of the village. The collective talent of the artisan vendors is overwhelming – you can find wood, leather, and stonework, jewelry, hand painted maps of fictional lands, intricately crafted pocket watches, apparel ranging from cloaks to corsets to witch hats, and even weaponry from a forge manned by a friendly Viking (who has a degree in blacksmithing from a university in Texas, as I learned).

Everyone I’ve introduced to ren fest has come away inspired to craft an amazing costume for the next year. Faire goers can invest years in crafting and perfecting one costume, or may take the challenge of creating a different theme for each visit. You know you’ve arrived sartorially once you’ve been mistaken as a shopkeeper, but the highest measure of success is when other visitors ask to take photos with you because your garb is so epic. Check the list below for books & movies about the Renaissance period for inspiration, and some crafting resources to get started on a dream costume of your own. 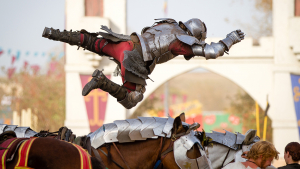 We in the Chippewa Valley are now spoiled with options for summer faire going. This summer saw Newbourne Village enter the scene, a fledgling faire in Chippewa Falls. The Chippewa festival runs in early summer, so it is unfortunately too late to visit this year. However, I was able to attend in June and was happy to find pleasant grounds, talented vendors, and even one of our former staff working there as a villager, so I can heartily recommend a visit next year. Help it to grow!

Tucked in the southeast corner of the state is the Bristol Renaissance Faire in Bristol, WI – the country’s 2nd oldest and 3rd largest permanent faire site, which emulates Tudor-era Bristol, England. Bristol Faire runs from early July to September 5, so there is still time for those willing to take a road trip to check it out.

My personal favorite, and the one I attend at least once each year, is the Minnesota Renaissance Festival in Shakopee, MN. It is one of the oldest and largest in the country (possibly the oldest and largest, but this claim may start fights with California and Texas depending on what metrics are used).  It boasts over 250 artisans, 16 stages for entertainers, and averages over 300,000 visitors a year!

Get thee to a Renaissance festival, before the season is spent!

View All Posts
Who Got All This Art in My Book?

Our Library: Then & Now
Scroll to top