I love my pets. They race to greet me when I come home. They recognize me as the human who cares for them and brings food. They are innocent and cheerful, and never fail to brighten my mood. I love them, and it saddens me deeply to think that many people don’t know how to properly care for these wonderful creatures.

Did you picture dogs while reading that paragraph? Cats? Guinea pigs?

I was describing my goldfish. 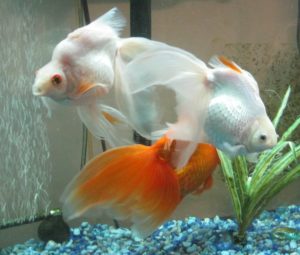 Everyone is familiar with the goldfish bowl. It shows up in countless cartoons, movies and television shows, sitting on a table with a single orange fish inside who aimlessly swims in circles. What few realize is that this setup is cruel and inhumane. Yes, a fish may live for years in one, but surviving and thriving are two different things.

I certainly didn’t know any better when I got my first goldfish in 2001. I thought I was giving him a luxury palace because I bought him a gallon tank with a light and a bubble stone instead of a bare, glass bowl. I quickly fell in love with my new pet and started to do what I should have done before bringing him home: research! Between the internet and books from the library, I soon realized I was doing everything wrong. Fortunately I was able to correct my mistakes in time to save my first fish from dying right away, and fifteen years later I have two large tanks full of happy goldfish. They bring me so much joy and never, ever fail to make me smile.

Sadly, it’s all too common for new fish owners to start out with misconceptions and outdated advice. They get frustrated, their fish suffer, and they may give up on the hobby without realizing what they are missing.

The goldfish bowl is a relic from ages past, when the concern for animal welfare was much less than today. A century ago, people would have scoffed at the idea of spending thousands of dollars to repair a dog’s injured leg, or giving a cat medicine to ease arthritis pain. Fortunately society has evolved so that animals such as dogs, cats, horses, and birds are treated with respect.

Fish, however, have been left behind by this revolution in thinking. Just because they aren’t furry and won’t crawl into your lap, somehow they are seen as lesser creatures. Very few veterinarians have the training to treat fish, and cruelty to fish is overlooked when mistreatment of other pets would spark outrage. If a store sold sickly puppies in tiny, filthy containers they would (and should!) be shut down and face legal consequences, yet I often see betta fish in similar situations at a major department store.

Studies have shown that fish feel pain just as acutely as mammals do. They can also become depressed, exhibiting lack of energy and appetite. I have witnessed my fish mourning. I had one named Sammy who sat in the corner of the tank, listless and sad, for weeks following the death of his tank mate. He wasn’t sick, and he perked up immediately when I put another fish in his tank. Goldfish are social creatures, and most are happiest when they have a member of their own species around.

Goldfish each have their personalities, however. Some are stressed when they are alone in a tank, while others don’t seem to mind it. Some aren’t that interested in humans and will swim away once they realize you’re not about to feed them, while others will stay at the glass for minutes at a time to listen to what I have to say (which is usually about how cute they are. I’m not saying they’re deep conversationalists.)

Everybody has heard the myth that goldfish only have a three second memory. This is completely false. My goldfish remember the routine of tank cleaning from week to week. When a sick goldfish goes into quarantine for a few days, his tank mates recognize him when he comes back and pick up their social dynamic right where they left off. Studies have even shown that a goldfish trained to hit a certain colored lever for food will remember how to do so a year later!

My goldfish pick a favorite sleeping spot and use it for months, then suddenly decide to change to a different place. One of my current fish, Shelley, would always sleep next to particular plant with her tank mate, Louie, beside her. After Louie passed away, I got a new fish named Dewey. He was a bit skittish at first in an unfamiliar place, so he would hide in the back corner of the tank to sleep. Within a week, Shelley taught him where the “real” sleeping spot was, and Dewey started parking next to her at bedtime. 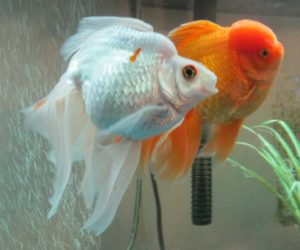 (Shelley is the white one and Dewey is orange.)

Once there was a brief power outage overnight, and one of the aquarium filters didn’t restart on its own. When I got up in the morning and approached the tank, Shelley looked at me, swam over to the pipe that goes into the filter, and bumped it lightly with her nose. Then she turned to look at me again, as if to say, “Hey, this thing isn’t working! Fix it, please!”

If you have only seen a goldfish in a bowl, you might think they are boring and just sort of hang there, not doing much. Well, of course. You wouldn’t be particularly interesting to watch, either, if you were trapped in a small, stuffy room with nothing to interact with. Give them a tank with plants, rocks, and room to stretch their fins, and they’ll do all sorts of acrobatic swoops, loops, and wiggles! Mine also play in the bubbles and current coming out of the filter.

The bigger the tank, the better. Larger tanks tend to have more stable water quality and require less fuss. Don’t do what I did and start with a tiny tank, then keep upgrading as the fish grow. Save the money and hassle and start with the biggest tank you can handle. The idea that goldfish only grow to the size of their container is a myth. The fancier, round-bodied types grow larger than a tennis ball, and the single-tailed varieties get over a foot in length and are meant for ponds. It’s technically true that a fish kept in poor conditions will not grow to its genetically destined size, but that’s because it either dies before it can get that big, or because its growth is stunted—which leads to its internal organs being crowded and malformed, causing many other problems. Fancy goldfish like fantails and orandas need a minimum of twenty gallons for the first fish and ten gallons for each additional fish. Goldfish produce more waste than just about any other aquarium fish, and they require plenty of filtration.

The proper care of goldfish is beyond the scope of this article, but it is also important to have adequate aeration, to clean the tank and change some of the water weekly, to understand the “cycling” process by which toxic ammonia is converted to nitrites and nitrates, and to provide a variety of quality foods.

It is my fervent hope that anyone considering goldfish as a pet will research what their finned friends need to thrive. Every bit of care you put into your fish will be repaid many times over with all the joy, relaxation and love they bring.

What a Fish Knows: The Inner Lives of Our Underwater Cousins by Jonathan Balcome

Kingyo: The Artistry of Japanese Goldfish by Kazuya Takaoka

A Fishkeeper’s Guide to Fancy Goldfishes by Chris Andrews

View All Posts
Blizzcon and LA

It Might Be Your Lucky Day!
Scroll to top